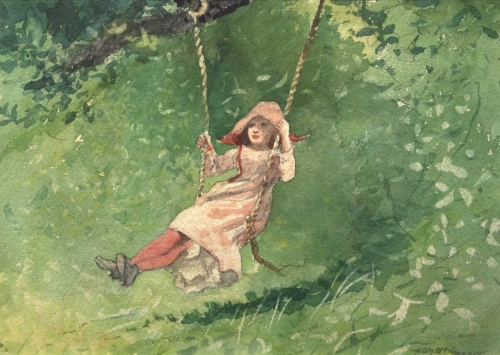 Girl on a Swing - Winslow Homer

When A. had learned all her letters, the next step was to teach her to recognize them when they are used. So I came up with a game.

Her absolute favorite activity on the playground had always been swings. Since she couldn’t swing herself yet, I saw an opportunity.

Then I’d give her a bigger push than usual. She’d laugh, and we’d try another word. Meanwhile she was being classically conditioned to like phonics.

We did this for months and months. Before she learned to power her own swinging, I got the chance to enhance the game a few times:

I’ve tried to do similar stuff with E. but he’s still young. Until recently the only questions I could think of that he could answer were animal noises. He’s making complete sentences now, so I’ll have to revisit this the next time we’re on the playground. He does know a few letters.

E. is now 4 years old and this technique is working great for him. He knows all his letters and he can work through them one by one with help. That’s a 100% success rate for this technique. I recommend it.