Review: "The Cat Who Saw Stars", The Sleepiest Audiobook of 1998 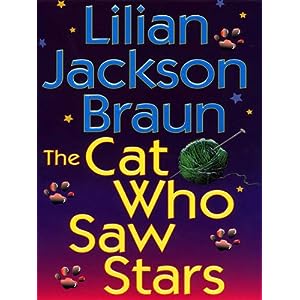 “The Cat Who Saw Stars” is book #21 in a series I’d never heard of called “Cat Who…” by Lilian Jackson Braun. And it is sinfully boring.

You can always tell when a book is part of a series. You squirm a little when a sentence is obviously supposed to inspire a familiar laugh. But a good book in a series is written to stand alone. I’ll give this book credit. It would probably have been just as bad in or out of a series.

When I found this on audiobook, mystery was a new genre for me. I hoped a book about mystery and aliens would be a good starting point, since I usually enjoy science fiction.

Instead I found a meandering jumble of tidbits of stories that were all dull in their own right.

First there is no goal. The dectective at the center of it doesn’t even know he’s investigating a mystery. He occasionally wonders about the stories people are telling in town.

Which brings me to the missing narrative. Since the detective has no goal, much of the book is a collection of scenes where he isn’t present. These scenes give the reader no reason to care about any of the characters.

Braun wrote the scenes to expose the odd happenings, but they were all about really boring characters. The occasional hint that something was starting always resulted in nothing interesting at all.

Perhaps I’m looking at it wrong. Perhaps this book is a cat. And maybe cat lovers will know how to pet this book and feed it and give it a scratching post. Or maybe they’ll know well enough to not bother a sleeping book.

By the end of the story, my library’s copy had a scratched disk. So I didn’t have to slog through that part. When I realized how relieved I was, I decided to always quit listening to a boring audiobook earlier rather than later.

The best I can say for the book is that the reading by George Guidall was excellent and professional.

I also posted this review on Amazon.com.