I just love this ad campaign. Remind me again why doctors aren’t scientists? 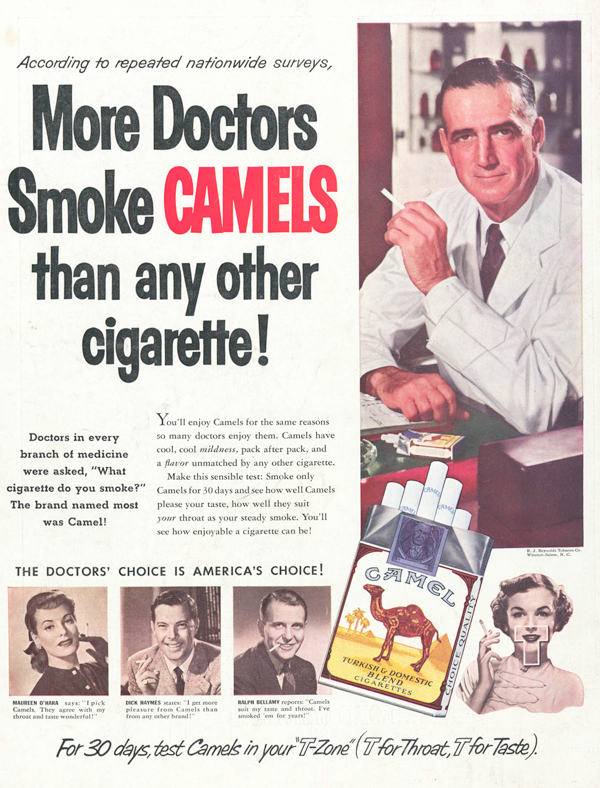 This ad is pure camp. But the most delightful part is the way this episode of US history is being spun for pseudo-science right now.

Just about any flavor of pseudo-science brings it out as a failure of science. There’s enough there to break it down.

Take a look at the ad above. See if the reason it’s stupid jumps out at you.

If you noticed that an ad for a particular cigarette brand isn’t a rigorous scientific study, give yourself 5 points.

If you noticed that a survey of what doctors smoke ignores all the doctors who don’t smoke, eat a chocolate. You deserve a real reward.

If you noticed that doctors aren’t scientists, give yourself the rest of the bucketful of points and promise to take yourself out somewhere nice.

The truth is that a lot of real scientists* got paid a lot of money to claim that tobacco could not be linked to lung cancer.

*Yes, real scientists including people with degrees and people who did real, good work in both the application and the theoretical sides of science. There’s no reason to say these weren’t scientists.

This included R. A. Fisher who discovered much of what we know about statistics. He famously taught the world that correlation does not imply causation, an arrow in the quiver of any good Internet arguer.

These people were mistaken about tobacco, partly out of their own willfull ignorance in the face of so much money from the tobacco industry. But there’s more.

At the time, opposing tobacco use made you look almost prudish. There was a popular push back against the puritanical mindset. And so it would seem regressive to find any reason to oppose tobacco use.

There’s definitely a warning here, don’t get me wrong. All the signs pointed to tobacco’s danger and it was definitely a miscarriage of rationality for these scientists to let the popular perspective influence them so much.

But what’s fascinating is that these tobacco scientists didn’t up and say, “There is no link between tobacco and lung cancer.” They couldn’t say that, because a strong correlation and a reasonable hypothesis of cause doesn’t allow an honest person to say that.

They used the much vaguer phrase used by professional doubters and deniers today: “Correlation does not imply causation.” That phrase is true, but to an untrained ear it implies more than it should. And that’s why people use it on all sides of any debate.

All this is to lead up to my personal indictment of pseudo-sciences today.

For every debate, there is someone who will want to draw an analogy with the mistakes of tobacco scientists. But analogy is a weak substitute for analysis.

No, they said “Correlation does not imply causation.” They didn’t have evidence to show that cigarettes were safe, so they called on the God of Doubt to do their arguing for them.

No, they said “We can’t be sure cigarettes are causing lung cancer. Maybe lung cancer and cigarette use are caused by the same thing.”

Only the one true God can fight GMO’s. The God of Doubt.

Climate change deniers: “Look, scientists thought second-hand smoke was bad for you too.”

The God of Doubt allows you to doubt anything you want.

And I think I’ve made the point that the analogies are often the reverse of what these people are trying to convey. In fact the scientists who made the mistakes of the tobacco era were some of the same people currently decrying the results of climate change studies.

If you align with one of the three groups above, or a dozen others, you are the tobacco denier. Even if you’re usually a good scientist.

What We Shouldn’t Learn

The point of the tobacco era of bad-science is not that scientists are sometimes wrong. We know that.

We always knew that. Yes, don’t forget it.

The point is not that we should avoid doubt, either. Doubt is the most important tool a scientist has. But like any tool, we must be careful and notice when it’s time to put it away. Don’t treat it like a magic wand.

We shouldn’t learn that “correlation doesn’t imply causation” is useless. It’s a very important concept. Its job is to remind us that we need a reason to think two things are linked, not just two lines that fit each other.

What Should We Learn?

The point is that we can easily be lead to mistrust good science through the use of what is essentially a meme.

This ad is not an indictment of science.

This ad is an indictment of advertising.

By the way, you can totally buy it on Amazon along with dozens of others!