Roll For It Game, And Secretly Teaching 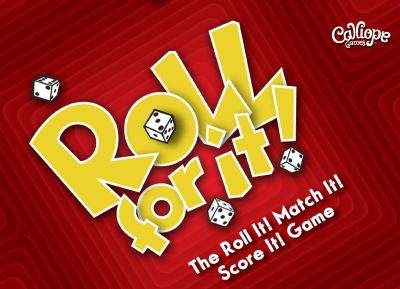 I got the game Roll For It to teach to my 3½ year old and it has had a great impact.

If your kid is good at numbers and matching, this is a perfect game for teaching some of the skills that games need. And it’s fun!

The dice are small, so this is not a game for kids who swallow stuff.

Board games seem like a good way to teach my kid some skills and have some fun myself. She’s 3½ and really good with numbers, so I figured it was time.

So we drove over to Emerald City comics because they’ve got a more interesting selection of board games than a Target. More interesting to me anyway.

As it turns out, there is very little produced for a 4 year old (the age I target for games, because she’s smarter than your kid). But someone there helped us out and we came home with Roll For It a simple dice and card game.

Actually the day before, we’d found some dice in the closet and she liked them, so I had a hint this would work out.

The rules are pretty simple:

So we started playing and A. won a card within a minute or two. Great way to start. Then eventually she got mad for whatever reason kids get mad. She stormed off and the game was over.

Yeah, so far, we haven’t finished a game. Which is the other lesson opportunity you didn’t realize you’d have.

Three-and-a-half year old kids lack the following skills which are prerequisites for any board/card/dice game:

All good things to learn. The point of the first games you pick will be to teach “games” to the kid.

After four or five game plays so far, I’ve seen a marked improvement in her ability to play. And each play has lasted longer.

So here’s how I’m tackling the three points above:

Mainly I’m trying to keep the game going fast. I’ve found that having four players slows things down. And at a party when everybody wants to talk about other stuff, it’s worse. People will not help you unless you explain to them what you’re doing here.

So if I can keep to two players, that’s better.

I also altered the game a bit. At any given time there will be more dice pictured on the cards than you can actually place. This gives the game a strategy angle. If you want a high-value purple card, well it has six dice pictured, so you can’t waste dice on any other cards.

So now we just play with the blue and yellow cards. They have two and three dice respectively, so you’re not likely to get stuck. Plus, I cheat and look at the cards before I place them on the table.

Mainly, these are solutions to make patience easier to attain over time.

Kids don’t know why there are rules. This is one where you yourself are liable to get upset.

Just keep repeating “Games are more fun when you follow the rules.” That’s the lesson the kid needs to hear and learn. And for yourself, it reminds you that games are supposed to be fun. As long as you can find a chance to have some fun, you’re doing fine.

Still, she steals the cards I win. Which is the other side of the coin. Rules can change. As long as everyone agrees. (Implicitly or explicitly.)

The short-term objectives of this game are obvious. Place a die, get a card, lots of fun.

There is no long-term objective. Kids can do long-term stuff, but I’m not sure games are a way to teach that.

With A., we have only recently even mentioned the medium-term objective: Win the game.

To do this, A. has decided you need to get six cards.

Officially, each card has a number on it and those are supposed to add up to 40. But whatever, house rules.

I’m not sure how this part is going yet. Each game is getting longer, so I mark this one as progressing.

We’ve also tried “Dominoes” and “Sorry”, which were both good, and eventually I’m gonna try all the games I’ve tagged on this Pinterest board. Probably Tsuro next.